What’s the best VPN, and how do you choose the right VPN for speed, security, and privacy when browsing the internet and streaming movies?

A Virtual Private Network, or VPN, is a service provided as an app (for iOS and Android) or software that’s installed onto a computer to improve security and anonymise your ‘digital footprint’. It encrypts your traffic which also makes it harder for hackers to track where you go online.

When you have a VPN installed, you can do further things like select which country your IP address is attached to. This means that services such as Netflix or Sports streaming players will think you are located in that country, which can open up possibilities for accessing movies, sports, and TV shows you might not have access to (even on paid services).

Further reasons some people might need to use a VPN include access to site that an ISP (Internet Service Provider) has blocked, sharing files like torrents and more. Some traveller might even look to a VPN for accessing services such as email when abroad in countries like China.

But not all VPNs are equal, however, and we list the best VPNs for different services below, including for speed, streaming, privacy, and just plain simplicity of use with good levels of security.

What to look at when deciding on a VPN provider

If some of this seems like an unknown, most VPN services do offer a trial period, and if the service seems like it is the right one, purchasing a longer term such as six or 12 months instead of month to month can save you up to 50 per cent of the cost.

What To Buy’s recommended VPNs 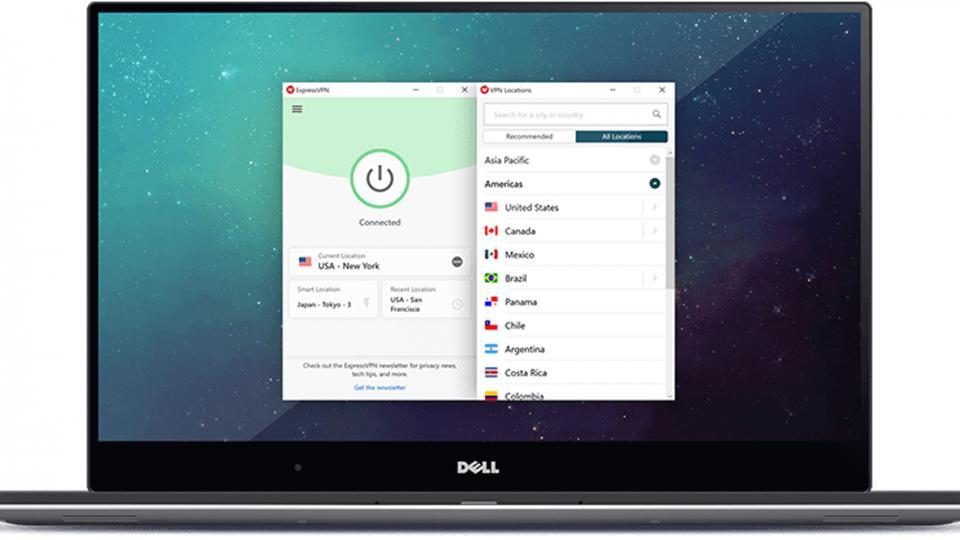 ExpressVPN’s entire service has been independently audited by PwC to prove that it doesn’t log or store any user data whatsoever, and its connection speeds to the US, Europe and Australia are almost double what we got using most other VPNs. That’s not the only reason why ExpressVPN is our undisputed number one VPN service. Its interface is dotted with light touches that make the overall user experience very pleasant and smooth. For example, it prompts you to disconnect one connection before making another to ensure your details don’t leak.

A bonus is that the service is based in the British Virgin Islands, which has no data retention or sharing laws. Its PC client and mobile apps look and work the same across devices and it lets you access almost all geo-blocked content – including Netflix, Disney Plus, BBC iPlayer, Amazon Prime, HBO and Hulu. You can even ask customer service what movie or TV show you’d like to watch and they’ll tell you which streaming service and country to connect to. It may not be as cheap as some of the other VPNs on this list, but it’s worth every penny for its superfast speeds and excellent customer service alone.

Best VPN for Everyday Use: NordVPN 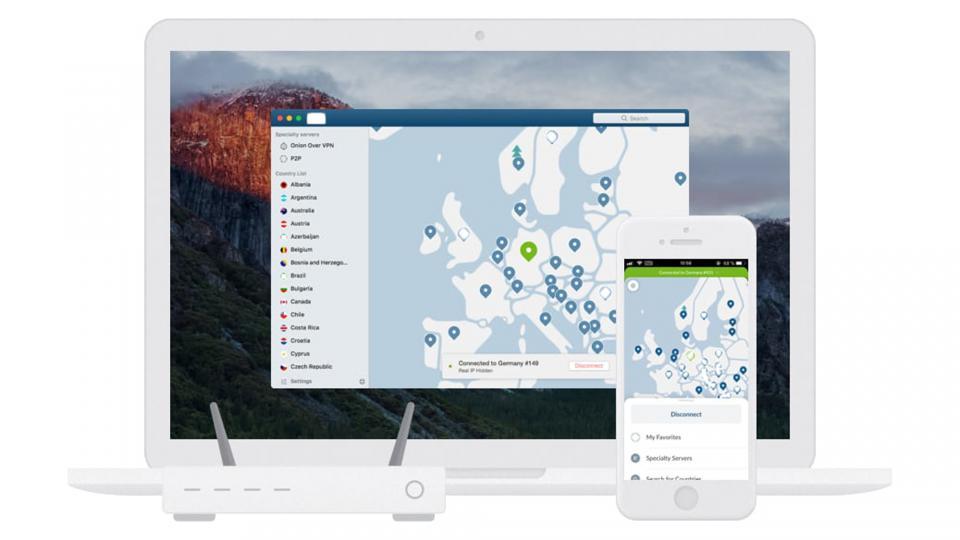 NordVPN is a friendly, easy-to-use VPN with a large, map-based interface. While it was always a brilliant VPN service, a recent update just made it faster and more secure. You can read about this in detail in our review (link below). What makes it special is its “Smart Play” technology that lets you access streaming service to watch movies and TV shows that aren’t otherwise available in the UK. The service has a large network of over 5,000 servers in 62 locations.

Privacy is one of NordVPN’s biggest strengths. The service is based in Panama, so you can be confident that the UK authorities won’t ever be able to get their hands on any of your data. Like ExpressVPN, NordVPN has also completed an independent audit to prove that it doesn’t keep or store any user logs. Apart from this, it has built-in ad and malware blocking, 24/7 customer support and it even works in China. 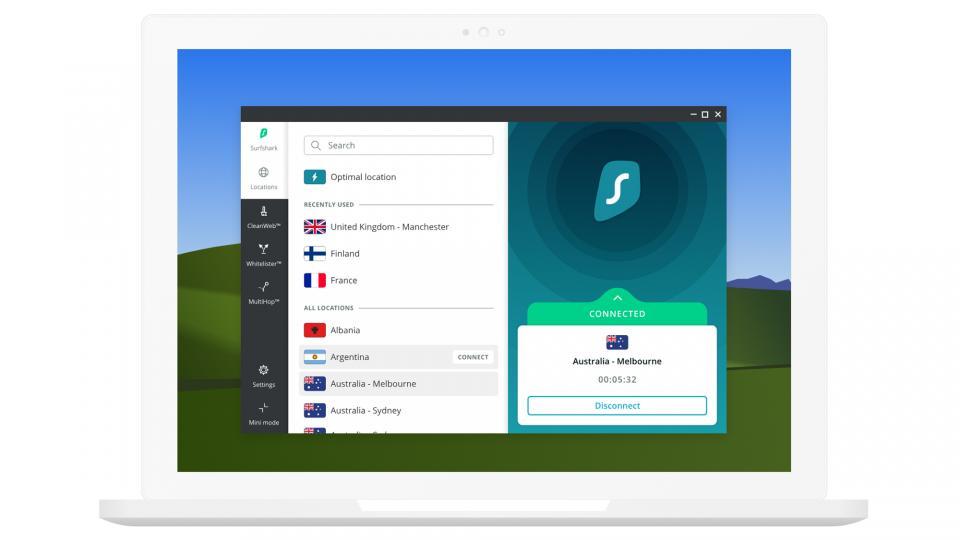 Compared to the other big names on this list, Surfshark is a relative newcomer to the VPN space, having launched in the spring of 2018. That’s not evident when you first use it because of its many fantastic features: it has a simple, easy-to-use interface, doesn’t log any data, there’s no limit on the number of devices you can use it on simultaneously and it’s based in the British Virgin Islands, which has no data retention or sharing laws. If you encounter a problem, you can simply speak to customer support, which is available online 24/7, and there’s even a 30-day money-back guarantee in case you’re not happy with the service.

Surfshark VPN has over 1,000 servers in more than 60 countries, which unlocks all sorts of content including Netflix, Disney Plus, Amazon Prime Video and even BBC iPlayer that is notoriously difficult to access from abroad. It recently added 15 Netflix libraries, including UK, US, Canada and Germany and access to Hotstar, which is an Indian streaming service for sports and movies across the world. Apart from this, it even has additional features that are good add-ons but ones you may not use as often, including an ad-blocker and a multihop feature. 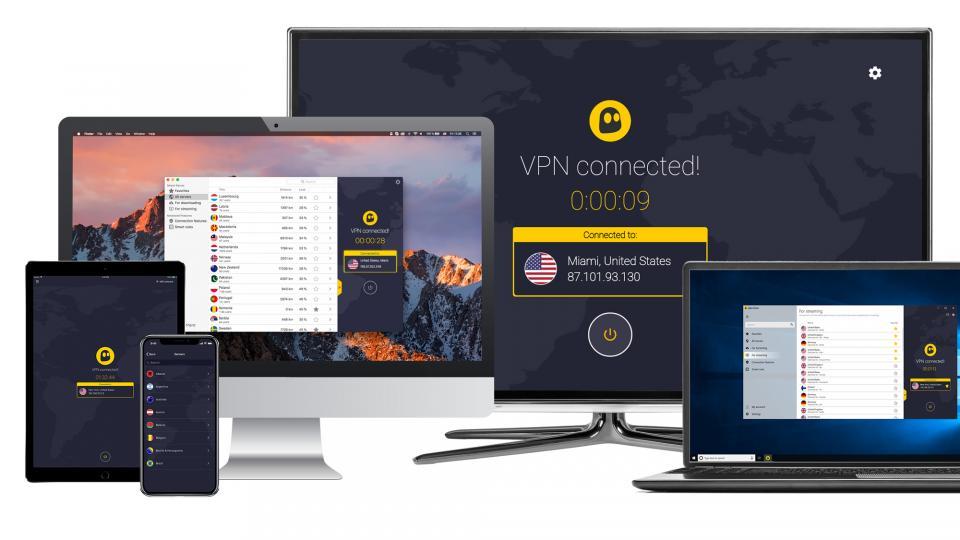 CyberGhost VPN has a fairly simple PC client interface with only a slider, but expand it and you’ll discover a world of possibilities. We like that it displays your distance to specific servers and its current load percentage. Servers at a longer distance from you will be slower, the same goes for those with a higher load percentage. Most people these days use VPNs for torrenting and streaming and CyberGhost has handy options specifically for those tasks. Servers are marked for specific streaming services like BBC iPlayer, US Netflix, YouTube and ESPN and all these work as advertised. Useful additional extras include the option to block ads, malicious websites and online tracking.

Its app looks similar to the PC client, which means there’s no learning curve involved. Apps also retain the PC client’s best features, including the option to access streaming services and mark servers as favourites for easy access. Its killswitch is turned on by default so your browsing activity won’t leak in case the VPN accidentally disconnects for whatever reason. All its servers are in its actual location unlike other VPN services, which sometimes have virtual servers. The service automatically chooses the best VPN protocol based on the device you’re using. 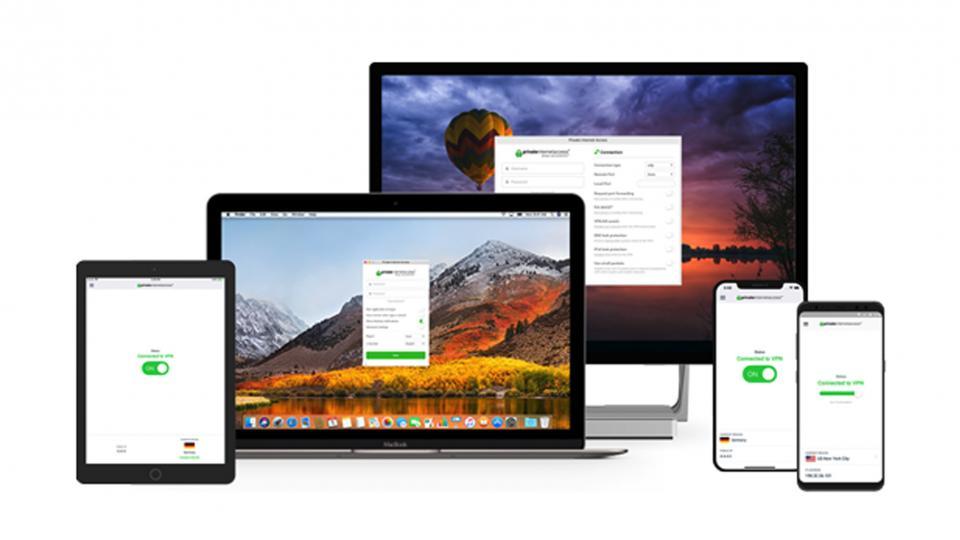 Better known as PIA, Private Internet Access VPN has been around for nearly a decade. This shows in a well-rounded product that can be instantly installed on multiple devices. Unlike other services on this list, you can use it on a generous 10 devices at the same time, making it an ideal option for a family to secure their browsing. PIA VPN has over 3,000 servers in 30 countries, mainly concentrated in North America and Europe, with three locations in the UK. While it has a strict no-logs policy and speedy connections, it doesn’t have 24/7 customer support, so we couldn’t feature it higher up this list.

Its Windows client has a good balance between features, speed and ease of use. Even though it’s easy enough for first-timers to simply install it and start enjoying its many benefits, we like that it has several options that will appeal to more technical users. This includes a configurable killswitch and an advanced PIA Mace feature that blocks domains used for ads, trackers and malware. You can also set up split-tunnelling to choose which apps only use the VPN. 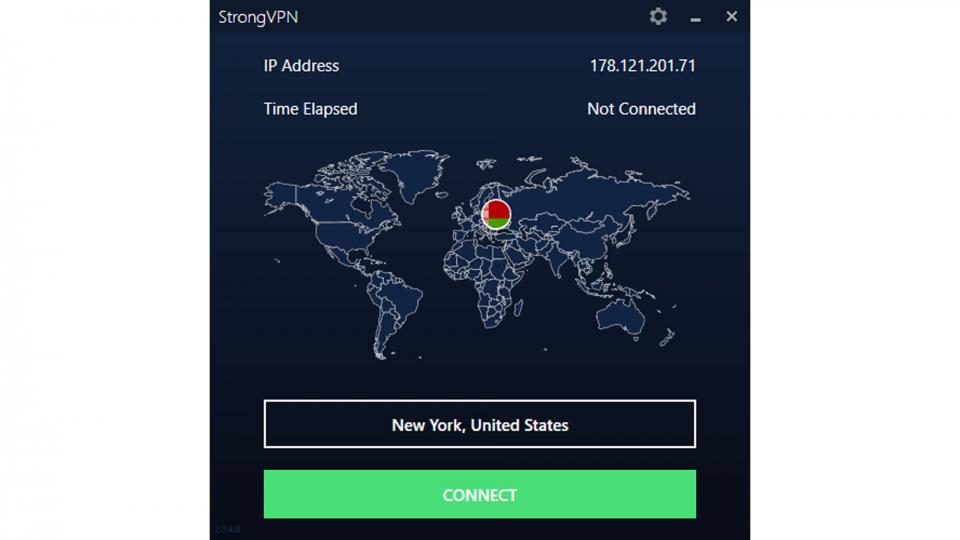 StrongVPN may not boast of the same features as the other VPNs on this list in terms of speed, servers and functions, but if you’re looking for a simple VPN that’s easy to use, then look no further. All you need to do is sign-up, download the app, enter your credentials and you’re ready to go. So many other VPN services can make this initial setup process a chore.

In terms of coverage, Strong VPN has servers in the UK, US, Canada, Australia and most of Western Europe, but if you’re looking to gain access to streaming services in Africa or India, then you better look elsewhere. In terms of streaming services, StrongVPN is great for streaming US or UK Netflix and even other US-based services like Comedy Central, but we did have a problem accessing BBC iPlayer from the UK when we last checked. Apart from that, it has all the basics – such as customer support, speeds and protocols well covered. 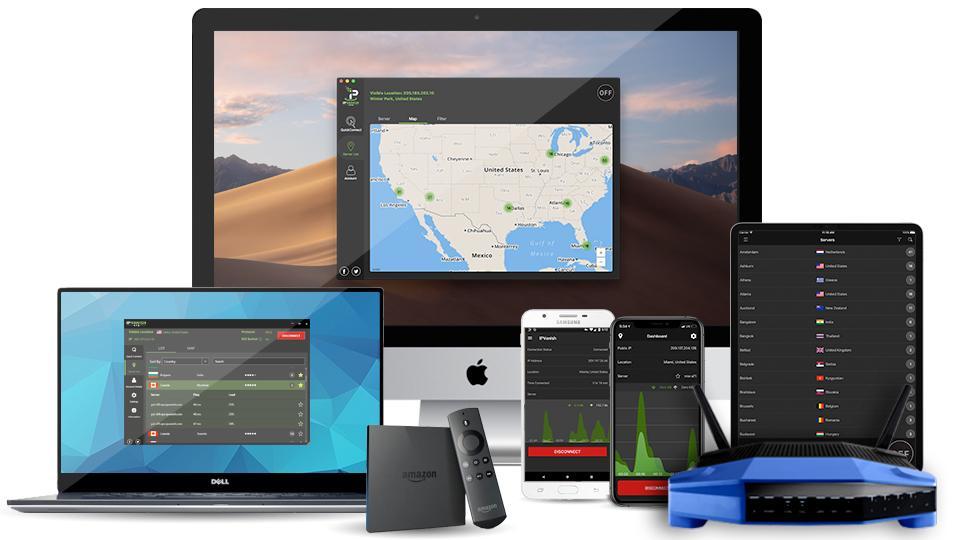 Most VPN services let you choose which country or location you want to connect to within a neat screen. We like that IPVanish takes this a step further by letting you choose your country, city and even individual server if you want. If you want to keep things simple, you can just choose the country and leave the other two to Best City and Best Server. Alternatively, if you prefer a graphical map-based interface, you’ll see the option to zoom into the city that you can select.

IPVanish’s big drawback is that it doesn’t bypass most geo-blocked content, which means you won’t be able to access BBC iPlayer, Amazon Prime or Hulu and need to talk to customer support to check which US servers unblock Netflix access. HBO and YouTube are a little more forgiving and the VPN compensates a little by letting you install it on Kodi and use it to download torrents.

It’s protected by highly-secure AES 256 encryption and uses OpenVPN or IKEv2 protocols, keeping it on par with other reputed VPNs. IPVanish supports a generous ten multiple connections and there’s 24/7 customer support. When we first reviewed it, there was only a 7-day moneyback guarantee, but this has now been increased to 30-days bringing it on par with the other good VPNs on our list. 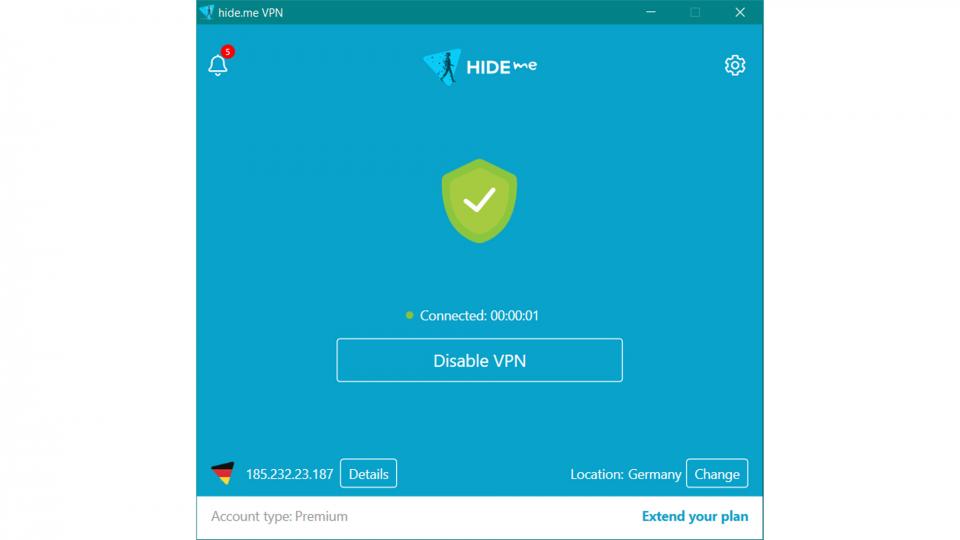 Even though most of the VPNs on this list – including Hide.me – come with a 30-days no-questions-asked moneyback guarantee, you may be reticent about providing your credit card details to a company based in a different part of the world and may simply want to simply try out how a VPN service works. Hide.me’s free service is limited to 10GB and just five free locations, which is a good way to wet your feet before diving into secure VPN waters.

However, if you really want to see why Hide.me pitches itself as the “world’s fastest VPN”, then you’ll need to upgrade to its Premium plans, which have nearly 2,000 servers, spread across 72 locations around the world and apps for a wide variety of devices. We like the fact that the Windows client is extremely simple to use, but there are also more advanced options for technical users that would like to configure their VPN protocol, activate split-tunnelling and so on. Our only criticism of the service is that it’s one of the most expensive on this list. 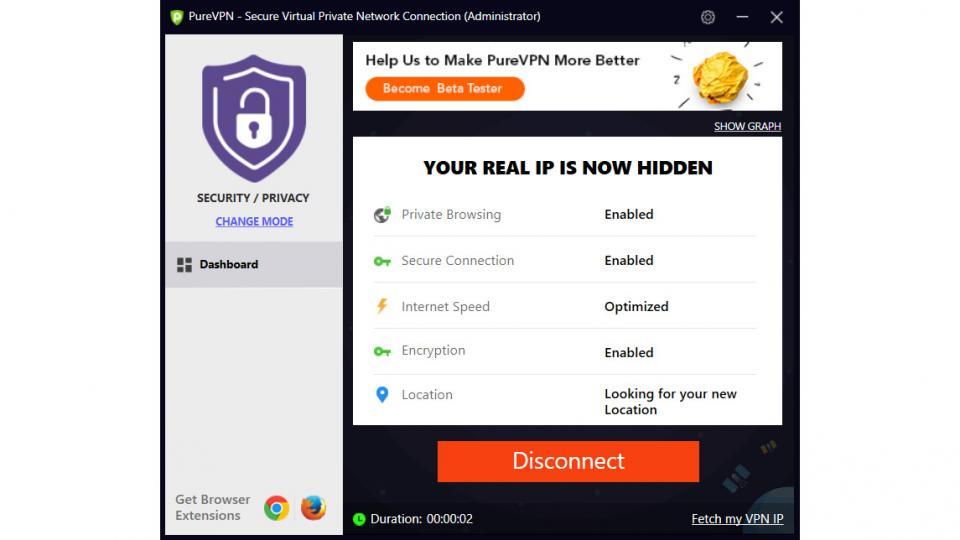 Normally sending your traffic halfway around the world has a major impact on the speed of your internet connection. Thankfully, using PureVPN, we were able to download files via the company’s New York server at almost 90% the speed of our regular UK connection, which is commendable. We were also very happy to find that the service let us access different streaming services including US Netflix, Disney Plus, BBC Player, HBO and others.

It’s based in Hong Kong, which doesn’t have any data-sharing arrangements with the British authorities, so you can expect a good degree of privacy, too. One thing we were disappointed with is its interface which looks overwhelming and dated compared to other services on this list which are much slicker and easier to use. It’s also definitely not the best service if you haven’t used a VPN before.