Dyson V11 Outsize lives up to its name with a bigger cleaning head and matching power.

Normally, there’s a balance to be struck between the convenience of a cordless and the powerful efficiency of an upright but the Dyson V11 Oversize aims to offer the best of both worlds.

The latest addition to Dyson’s already brilliant V11 range is bigger and more powerful than the other models in the range in every respect, with a cleaning head that’s 25 per cent wider and a collection bin that’s 150 per cent bigger than the other V11 models. Retail is normally $1299.

What you need to know

If you know your Dysons, the V11 Outsize will look very familiar, with essentially the same basic design as its predecessors. Hold them side by side, however, and the Outsize looks significantly beefier. This isn’t just confined to the bin and the floor head; the vacuum engine has 18 of Dyson’s cyclones, compared to 14 in the standard Dyson V11. 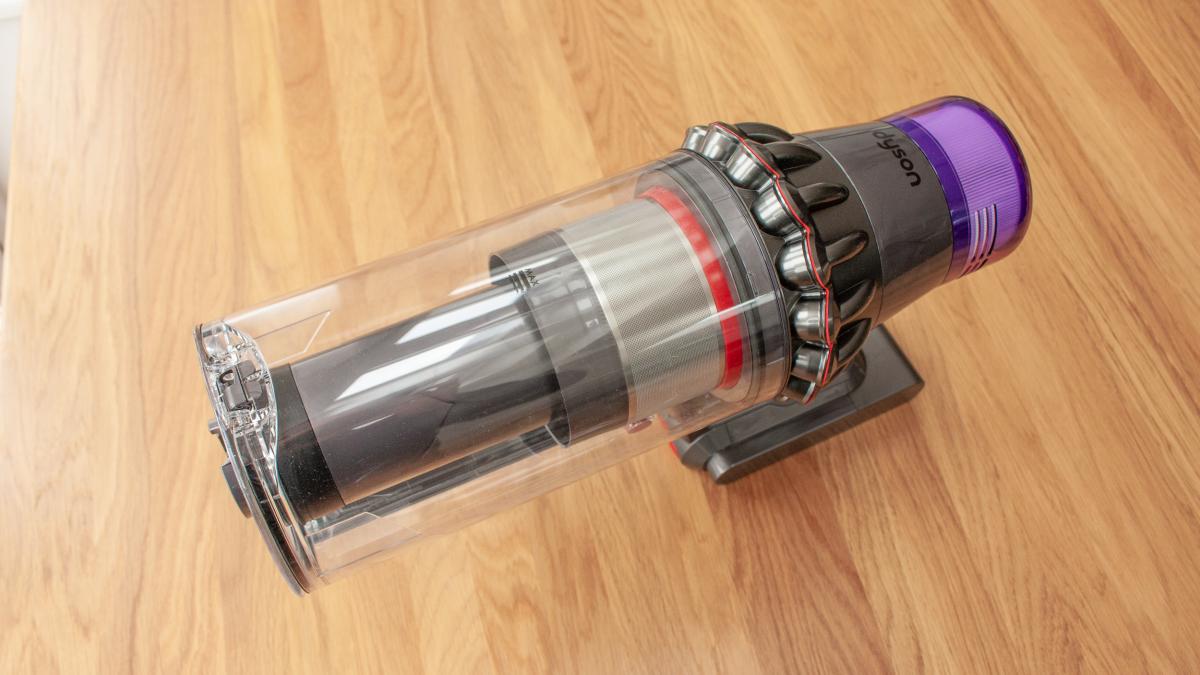 The one big drawback to all this is the weight. With the large High Torque XL cleaning head and the battery attached, it weighs 3.5kg, which is a lot to lug around. However, the larger floor head makes shorter work of cleaning chores, so it shouldn’t be necessary to carry it around for as long. It cleans very effectively, too, as we’ve come to expect of Dyson’s cordless vacuum range.

At $1299, only Dyson’s other V11 models come close to matching the price of the Outsize. At the time of writing, the V11 Absolute available via Kogan ($1099) it’s the closest alternative to the Outsize, and there’s also the V11 Animal (also at $1099 at Kogan).

If your budget is lower, there are plenty of alternatives around, although we haven’t seen a cordless model this big from any other manufacturer. The V8 Animal does a good job cleaning and costs $799.

At such a high price you’d expect the V11 Outsize to come with plenty of accessories and it doesn’t disappoint. As well as the main vacuum unit, the extension pole and the High Torque XL cleaning head, it comes with a smaller soft head for hard floors and a mini-motorised tool for cleaning stairs and other inconvenient places. 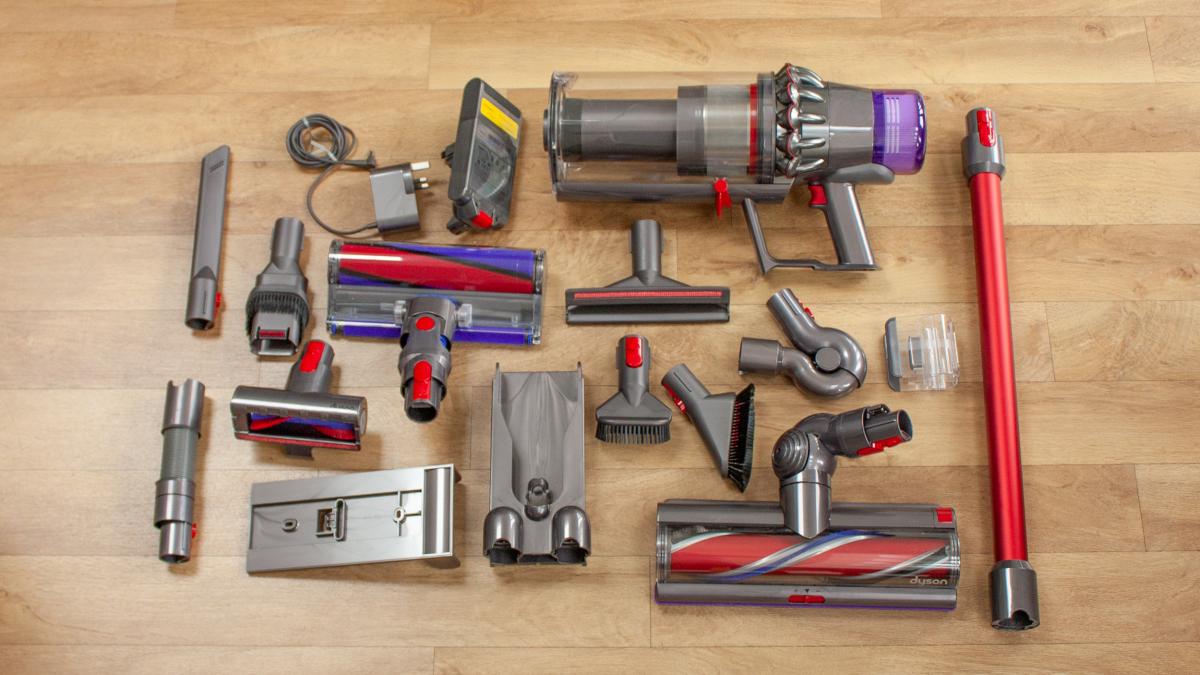 There’s also a combination brush and straight suction tool, a crevice attachment, a wide and a soft brush, a bendy extension tube and an “up-top” adaptor for accessing tricky-to-reach high areas such as shelves and the tops of wardrobes.

It also comes with a single, detachable battery, a wall-mountable docking station and a clip to connect two attachments to the main pole so they’re always at hand.

As I’ve already mentioned, the V11 Outsize looks just like the previous V11 models but bigger. 3.5kg is at the upper limit of how heavy anyone would want a cordless vacuum cleaner to be without it becoming unwieldy, and smaller people might struggle to use it. Compared to the smaller Vs, the V11 Outsize feels bulky and cumbersome.

The ball joint that connects the floor head is flexible and versatile. However, it’s worth noting that it doesn’t have the light manoeuvrability that you might be used to from your current cordless.

Although it creates more cyclones than other V11 models, the V11 Outsize clearly needs these to give its larger volume the same amount of suction as its smaller predecessors. I measured the same peak levels of suction as we’ve seen in the V11, with 10kPa in Economy mode, ramping up to 30kPa on high power.

Combined with the powerful motorised cleaning head, the V11 Outsize impressed during testing. On a short-pile carpet, in a single pass of the High Torque XL cleaning head on maximum power, it collected 96% of a measured spillage of Cheerios. It wasn’t quite as effective with flour, capturing only 86% on the first pass, but it made short work of the rest on a second run.

On the hard floor, results were even better. The Cheerios stayed at 96% but only a small residue of flour was left on the floor after a single pass. Over all the tests, it worked out to an average success rate of just under 95% on a single pass, which is a superb result.

Overall, its performance is only bettered by fellow Dysons, and then only marginally. Give this vacuum a couple more passes and I suspect it would pick up almost anything small enough to fit through its tubes. 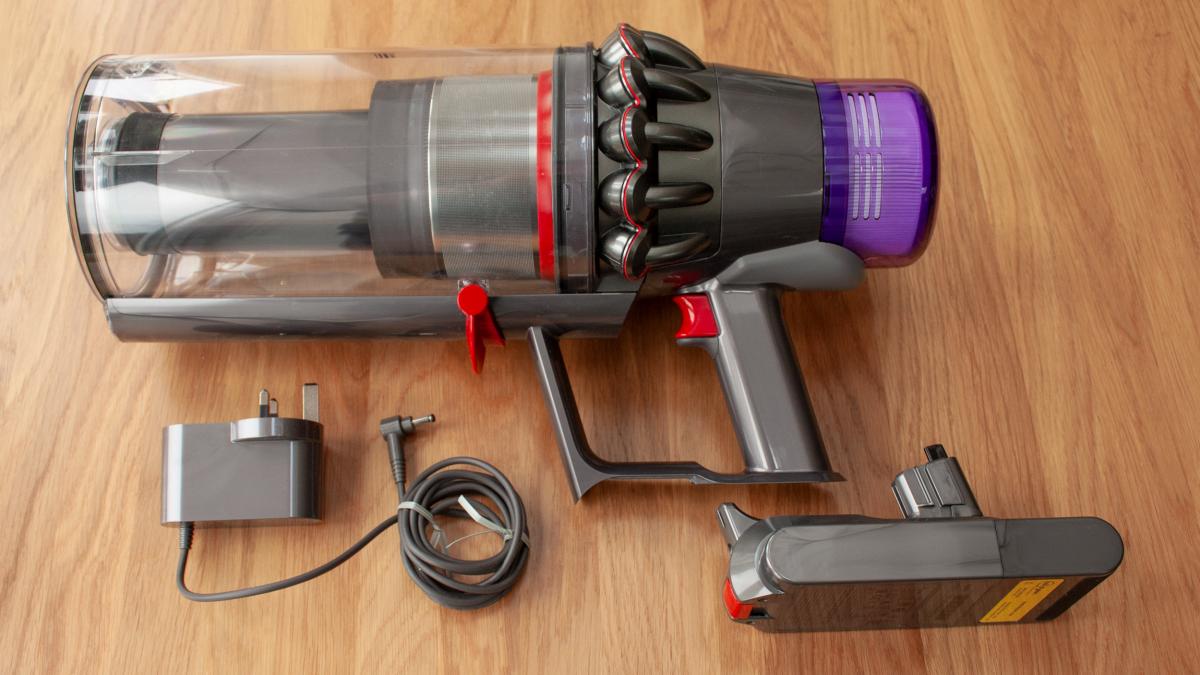 The Dyson V11 Outsize comes with three power modes: Economy, Max and Auto. These are selected using the button on the top of the filter, where a bright, clear, colourful screen shows you which mode you’re on. It also informs you how much battery life you can expect from the mode in minutes and seconds, which is a useful at-a-glance guide. Recharging takes around 4hrs 30mins.

Auto mode is where most cleaning work will be done and it clearly works, audibly changing power levels depending on the surface being cleaned. Less suction is used on hard floors, where the vacuum doesn’t need to fight against the environment, and the power ramps up when it hits carpet and needs some extra suction.

In Economy mode, the vacuum lasted longer than any cordless Expert Reviews has tested to date, with a phenomenal 1hr 19mins on the clock when the battery ran out. This is the first time we’ve seen a cordless vacuum break the one hour barrier and it just kept going. Its battery wasn’t quite so efficient at maximum power, where it lasted 9mins 8secs. Other V11 models have lasted longer than 12 minutes at full power during testing but getting close to ten minutes is reasonable considering the strength of the suction. 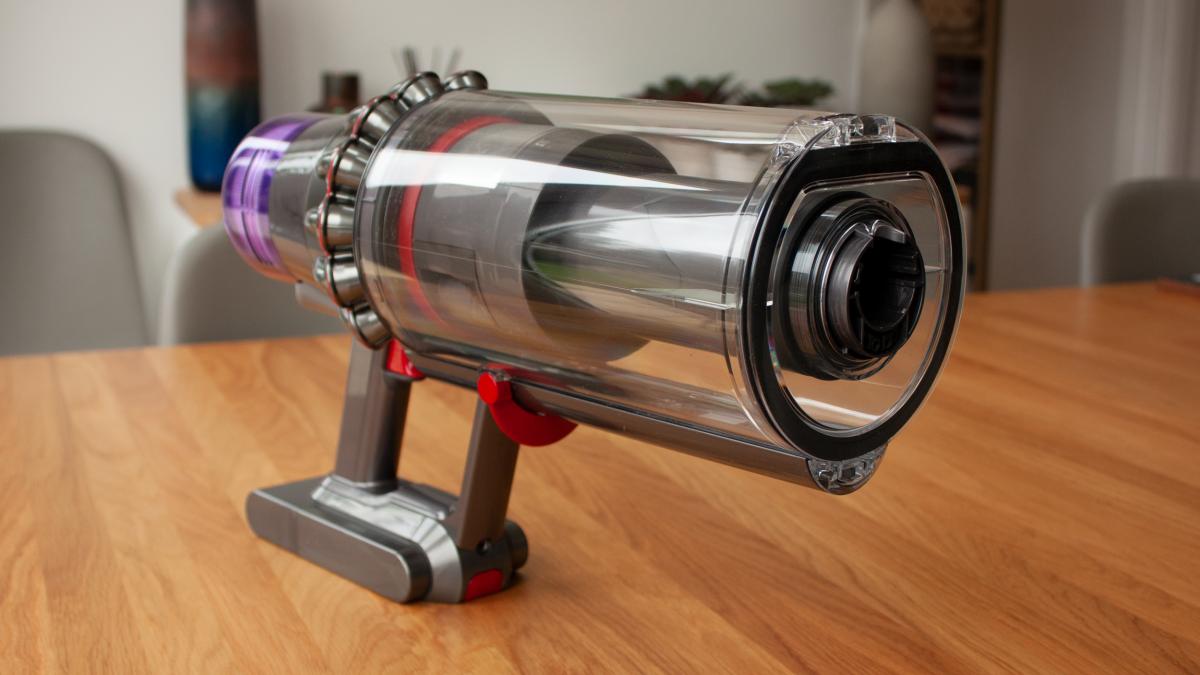 It’s worth noting that the Dyson V11 Outsize has a trigger control, which needs to be held in all the time it’s in use. This stops the vacuum running when you put it down, which conserves the battery and makes it less likely that something will be sucked up accidentally. However, although it barely requires any pressure to hold the trigger in, it’s not ideal for people who find such a grip difficult to maintain.

Once a cleaning session is finished, emptying the bin is a simple process of removing any attachments, pointing the end where the contents need to fall and pushing down the lever on the side. This lifts the outer casing free of the filter, then opens a door in the bottom, releasing the detritus. The bin can be cleaned with a damp cloth. The filter, which is housed in the end of the device, can be washed under running water but needs to dry for 24 hours before it can be refitted.

We’ve been fans of Dyson’s cordless vacuums for as long as we’ve been reviewing them at Expert Reviews and with the V11 Oversize the firm is onto another winner. Its cleaning power is as good as it gets, while the larger size means it covers more ground per pass and needs emptying less frequently than its smaller siblings. With extra-long battery life, you should be able to clean the whole house without interruption, too. 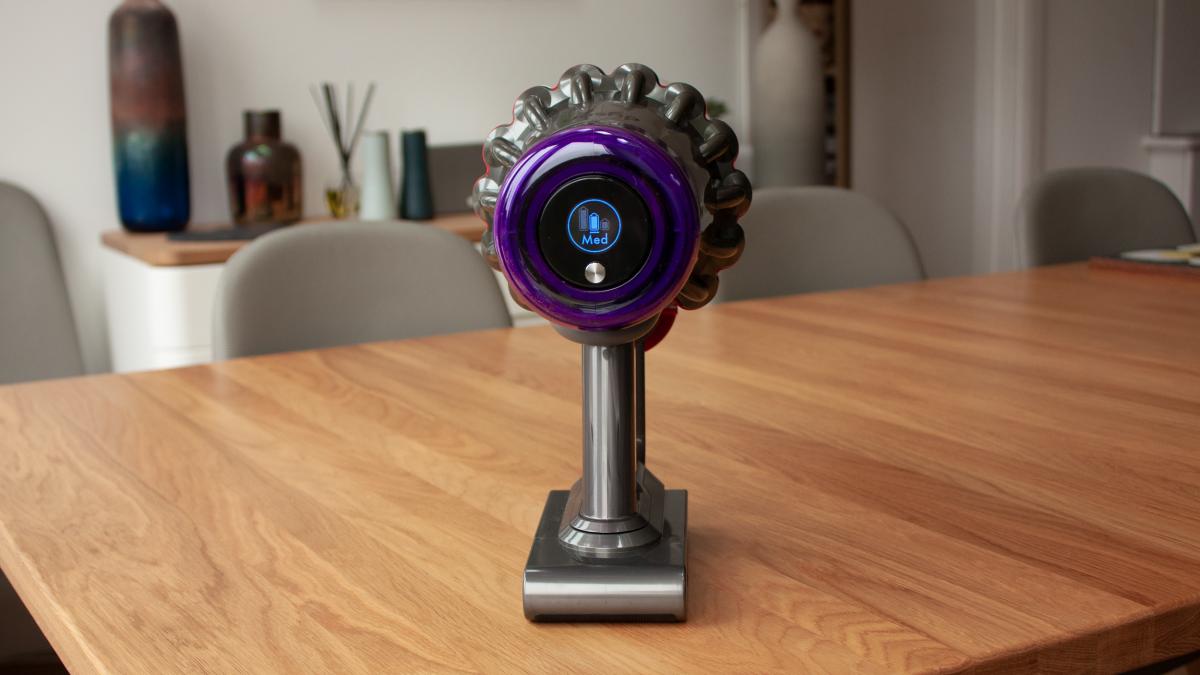 There is a downside, however, and that’s weight. At 3.5kg, the Dysion V11 Outsize is a lot of vacuum cleaner to lug about, especially in a cordless model. As a result, it’s cumbersome and it lacks manoeuvrability.

Clearly, your mileage may vary here. If you’re fit, strong and healthy it probably won’t bother you but for many others – the elderly and frail in particular – the increased weight may be too much to handle. If that’s the case, and you still want the best possible cleaning power, plump for one of Dyson’s smaller models – the Dyson V7 instead (and only $399).