GoPro’s Hero 9 Black offers 5K recording, a front-facing screen and a bigger battery. This might just be the best action camera yet.

GoPro releases a new flagship action camera once a year like clockwork, but it’s been a while since the platform received a significant shakeup. In 2020, with the arrival of the new GoPro Hero 9 Black, that’s exactly what we’re getting.

With a new sensor, new maximum photo and video resolutions, improved stabilisation and a beefier battery, users with older Heros may now find a serious reason to upgrade. Meanwhile, the inclusion of a front-facing colour screen for the first time, makes the Hero more accessible to new users and opens up a whole new world of selfie-style shooting.

Nearly every aspect of the Hero has seen some level of refinement in the GoPro Hero 9 Black. The natively waterproof body with inbuilt mount we saw introduced with the Hero 8 Black remains, although the body itself is now larger in all dimensions. This may disappoint those who’ve only just swapped their accessories to fit the Hero 8 but the change allows for a larger battery, as well as that secondary screen. 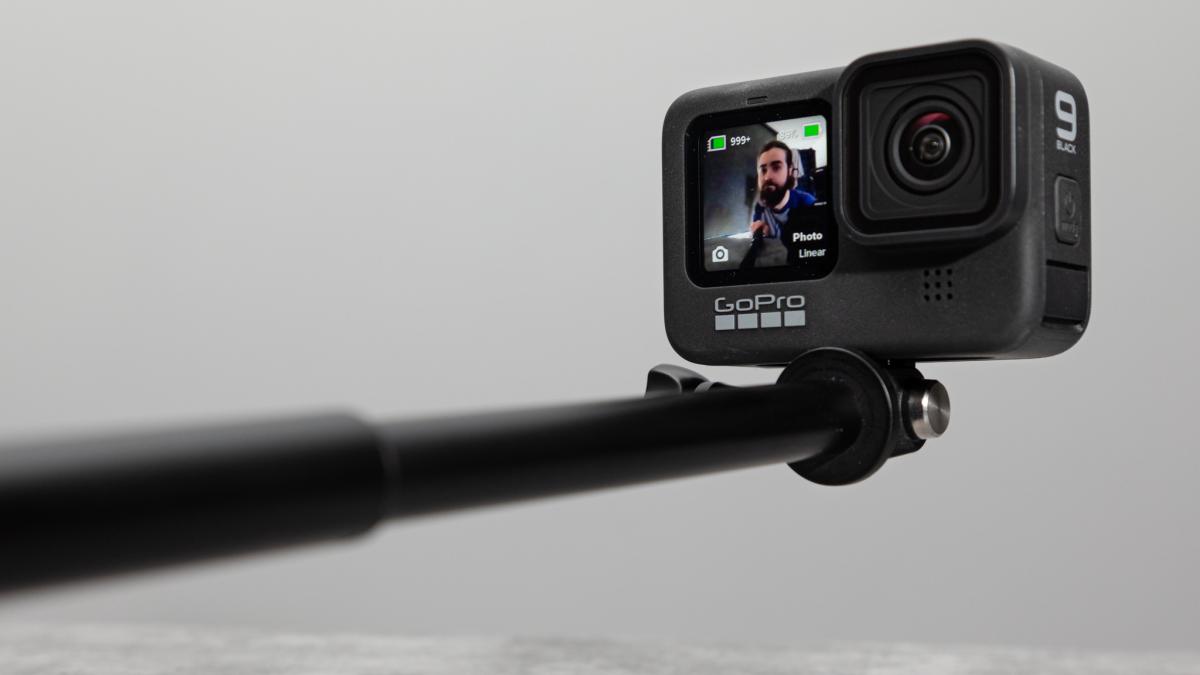 The imaging sensor has seen a resolution bump for the first time since the Hero 3. The new sensor allows the Hero 9 to capture 20MP stills, up from 12MP, and record video at up to 5K. While at first glance this may seem like an odd resolution (how many people do you know running 5K displays?), in practice it’ll allow you to crop in further during editing for more precise framing. Shooting in 5K to edit and export in 4K should in general also provide you with a cleaner, less noisy final image.

While 5K recording tops out at 30fps, 4K at 60fps is available in all view modes bar SuperView, and up to 120fps is supported at 2.7K using the wide view mode. For higher frame rates still, up to 240fps is possible at 1080p in linear view and narrower, enabling 8x slow motion playback at 30fps.

Hypersmooth Stabilisation also gets an upgrade, with the Hero 9 packing Hypersmooth 3.0. Hypersmooth 3.0 and its “boost” mode are supported in all resolutions and framerates, although the boost tacks on a 25% crop. GoPro has also added the Horizon Leveling feature from its 360 cameras. While it’s only available in linear view, Horizon Leveling allows your footage to not only remain stabilised, but level, too. 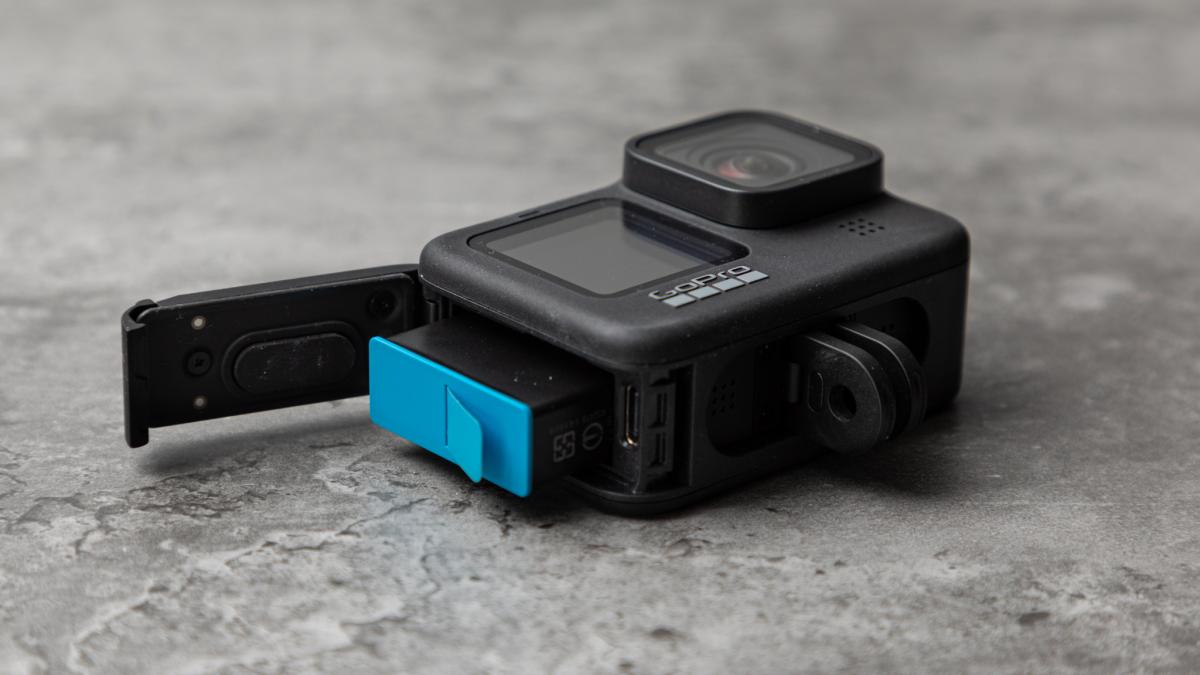 A range of other features have also seen tweaks for this latest flagship. Timewarp 3.0 now allows for sections of 2x slow motion in hyperlapses. Hypersmooth has been added to in-camera streaming. And new HindSight and LiveBurst options now allow you to start shooting video and photos before you even press the shutter button so you don’t miss your shot.

At full retail price the GoPro Hero 9 will set you back $699.95. You can, however, save yourself a fair chunk of change buying it for $599 here.

While you’ll lose 5K recording and that secondary screen, the previous Hero 8 Black is still an incredibly capable action camera and currently retails for $499.

As for the non-GoPro competition, the main challenger here is the modular Insta360 One R. This has a single screen but allows you to orientate the lens forwards or backwards to suit your needs. There’s also One R with a 1-inch sensor module that supports 5.3K recording for $749 with a dual-lens module that turns the One R into a 360-degree camera.

Lastly, there’s DJI’s Osmo Action, which offers a similar dual-screen setup to the Hero 9, supports 4K recording at up to 60fps, lets you shoot 8x slow motion in full-HD, and costs a mere $402.99.

From a distance everything looks like business as usual with the Hero 9 Black. The materials, control layout, in-built mounting point and overall silhouette are essentially the same as before. Up close, though it is noticeably bigger and heavier than its predecessor, measuring 55 x 71 x 34mm and weighing 158g compared to the Hero 8’s 49 x 66 x 28mm at 126g.

Across the front there’s the usual protruding lens, a microphone and of course that new front-facing LCD screen. The lens has had a bit of a tweak and is now interchangeable and user-replaceable so scratches and cracks won’t write off the whole camera. GoPro has also announced the Max lens mod which will allow the Hero 9 to copy the ultrawide 155-degree field of view from the GoPro Max 360 camera and shoot with “Max Hypersmooth” stabilisation in 2.7K resolution at 60fps.

That new secondary display is a colour LCD measuring 25 x 25mm. As has a square aspect ratio you have the option to display either your full frame with horizontal black bars above and below, or show a square central crop. Key stats are presented around the periphery of the frame or, if you miss the old-school monochrome status screen, you can enable an LCD equivalent. 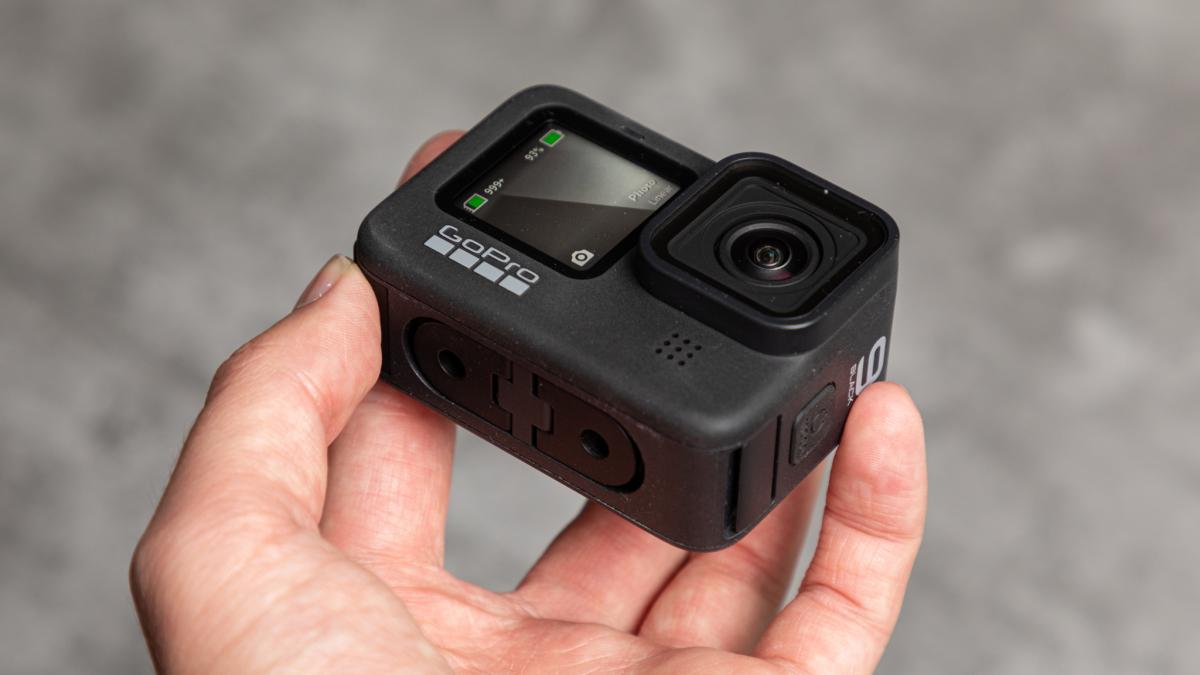 The larger body allows for a larger 50 x 33mm primary touchscreen at the rear and, while this is used for the bulk of camera control, it’s supplemented by a large shutter button on the top panel of the camera and a multifunction power/mode button on the right edge.

A second microphone sits beneath this power button but, unlike on the Hero 8, this microphone is housed within a special inlet that’s designed to allow it to drain faster when filming underwater. The inlet looks remarkably similar to the door latch on the opposite side though, so you’ll need to make sure you don’t get the two mixed up.

On the left is the Hero 9’s water-tight door, behind which is the battery, micro-SD card slot and USB-C port. The battery is all-new for the Hero 9 and is 30% bigger than before. This is good news if you don’t like having to change batteries on the go, although less so for those who already have a collection of incompatible older GoPro batteries.

You have a lot of options to pick from while shooting with the GoPro Hero 9 Black. The multitude of resolution and frame-rate combinations alone read like a phonebook.

Fortunately, the quick select menu from the Hero 8 sees a return, allowing you to either pick suitable setting combinations from GoPro’s presets or make your own. The mode button allows you to quickly hop between photo, video and timelapse modes, then a simple tap and scroll across the touch screen will let you toggle between HD, 4K and 5K setting combinations. You’re also able to customise some of the on-screen toggle options for each shooting preset. 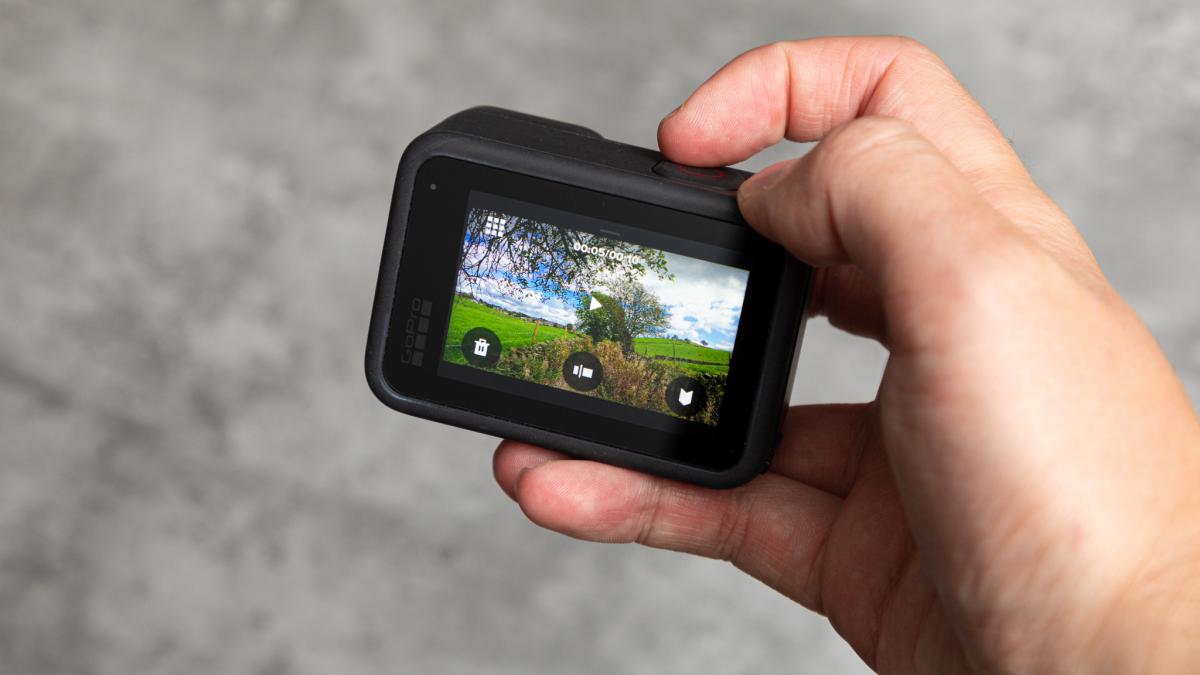 In video mode, the GoPro Hero 9 Black produces consistently well-judged exposures, with accurate colour reproduction and excellent dynamic range. In resolutions of 2.7K and above the Hero 9’s high bit-rate mode records at up to 100Mbits/sec, with the standard bit-rate option topping out at 60Mbits/sec. You can opt to shoot with a flat profile should you want more latitude for tweaking your footage in post but I found the GoPro colour profile produced perfectly usable results with excellent pop straight out of camera. 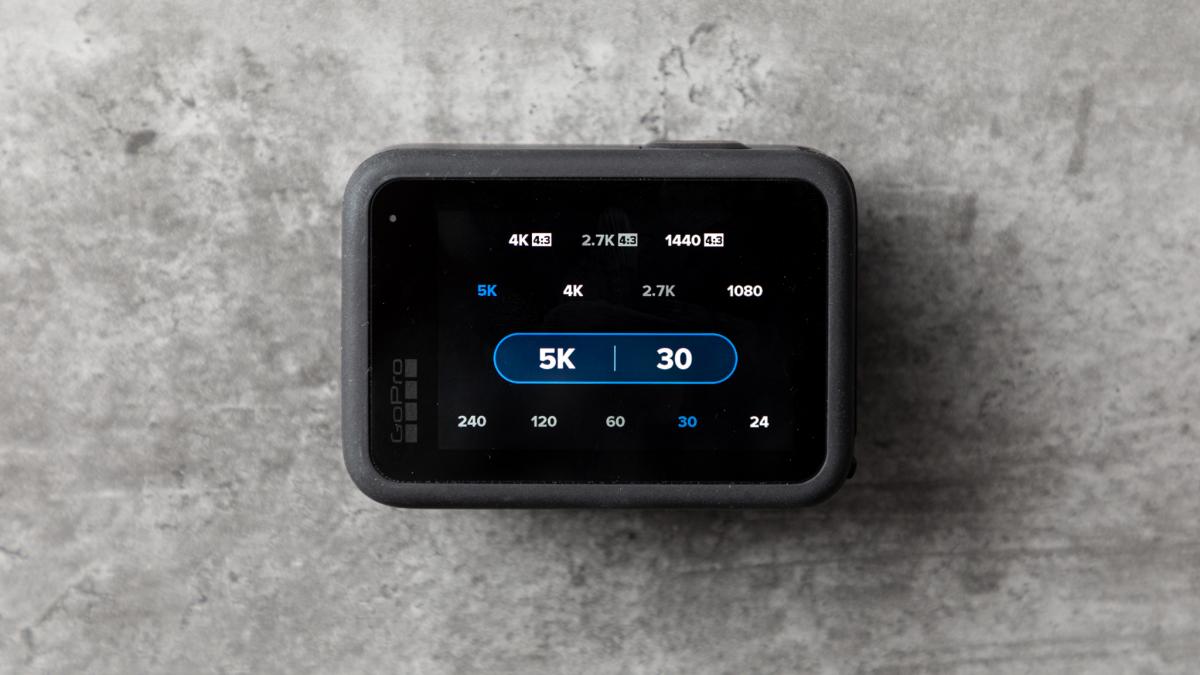 In 5K mode, as you’d hope, the recorded footage is richly detailed and, under the right circumstances, provides a noticeable detail edge over the 4K footage. I say the right circumstances because the Achilles’ heel of all action cameras persists in that you really need to be shooting under bright sunlight. For outdoor sports during the middle of the day that 5K footage is really great but in lower light situations things get grainy and muddy quickly so you won’t notice as much of the benefit.

For stabilisation, Hypersmooth 3.0 is the best we’ve seen. It’s able to smooth out even more erratic movements and, unlike the stabilisation found in some smartphones, it feels fluid and natural; it won’t suddenly jerk when transitioning from a static shot to a moving shot. 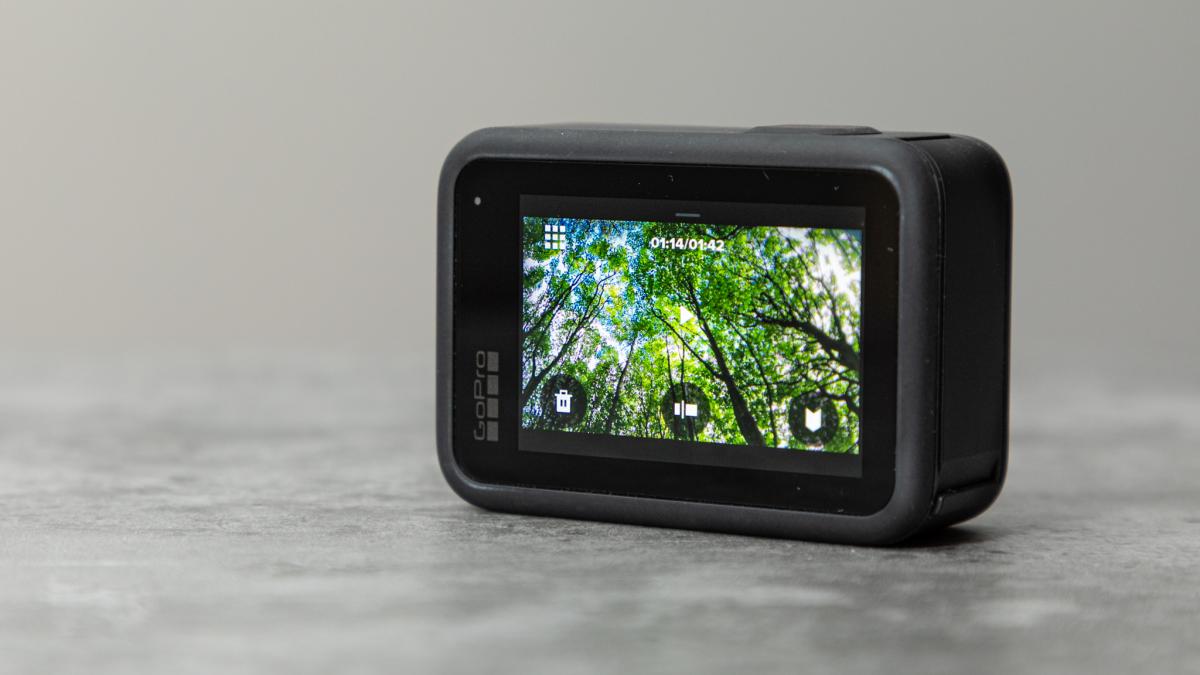 Better still, Hypersmooth 3.0 is available in all resolutions and framerates, so you can keep your footage consistent and, when things get really hectic, there’s even a “boost” mode. Boost keeps things even steadier although it comes with a 25% image crop penalty.

Another excellent inclusion is the Horizon Leveling feature first seen in GoPro’s 360 cameras. When working in conjunction with Hypersmooth, this keeps your shots not only stable, but level too. This really lifts the GoPro above the competition, giving footage a more professional, polished look and avoids any sea-sick inducing roll.

Audio quality is essentially the same as on the Hero 8, which is to say it’s excellent. You can toggle wind reduction and even opt to record a RAW audio track with a user-determined level of processing. Regardless of which options you go for, the Hero 9 sounds great. Long gone are the days of tinny action camera audio. 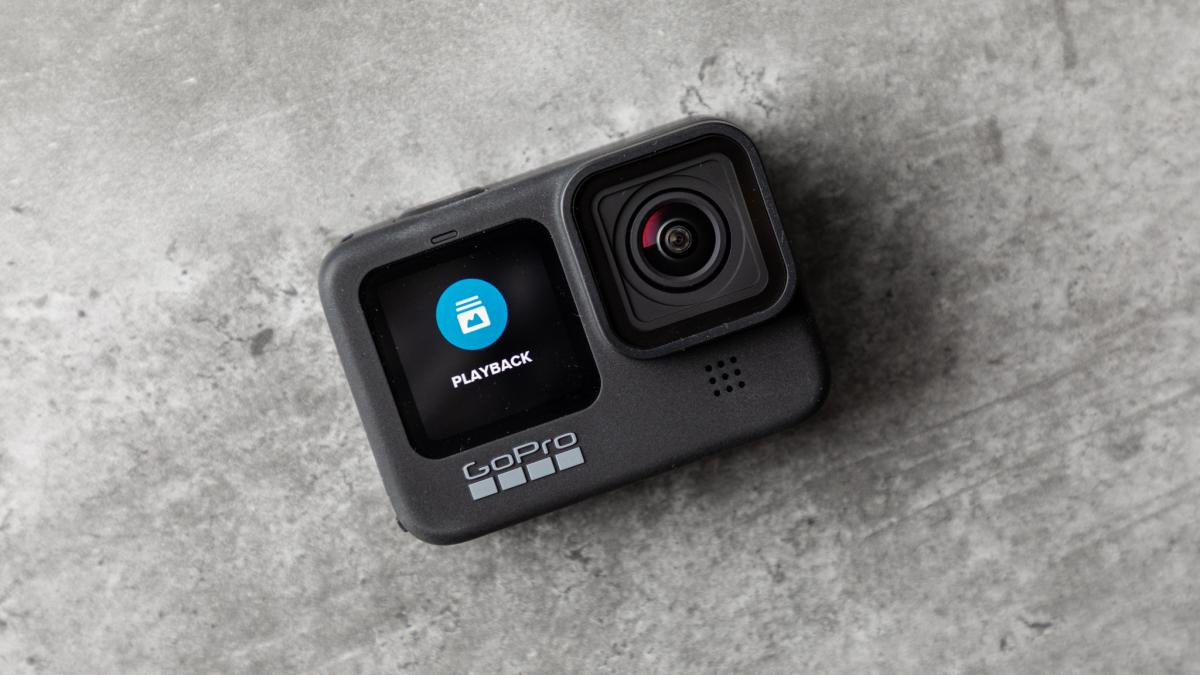 The front-facing screen, although small, works very well for selfie-style shooting. It’s worth mentioning that it’s not always the smoothest, though, and while recording at higher resolutions it seems to stutter. While this has no impact on the recording, the liveview image can drop down to perhaps 10 or 15 frames per second which can be a little distracting.

In a similar vein, the rear touchscreen can also be a little temperamental. With so many settings to choose from you often need to be quite precise with your fingers and, unfortunately, I found it wasn’t always as sensitive as I’d like it to be. It often ignored some gestures, leaving me frustratingly jabbing at the screen. This is hopefully something that’ll be swiftly sorted out in an update but, as-is, it takes a little of the polish off of this flagship product.

If you’re looking for the best GoPro Hero camera, end your search, this is it. The refinements made to the overall design, UI and performance all come together to create a solid, versatile action camera – and the Hypersmooth 3.0 stabilisation is second to none.

While there are a couple of display related quirks that need smoothing out via firmware updates, they don’t stop the Hero 9 Black from comfortably becoming the one to beat.

The retail launch price is perhaps a touch high but with GoPro’s direct price with bundled subscription pitching the Hero 9 below the price of a standard Hero 8, a five star recommendation is a no-brainer.