The Best Cordless Screwdrivers for Home 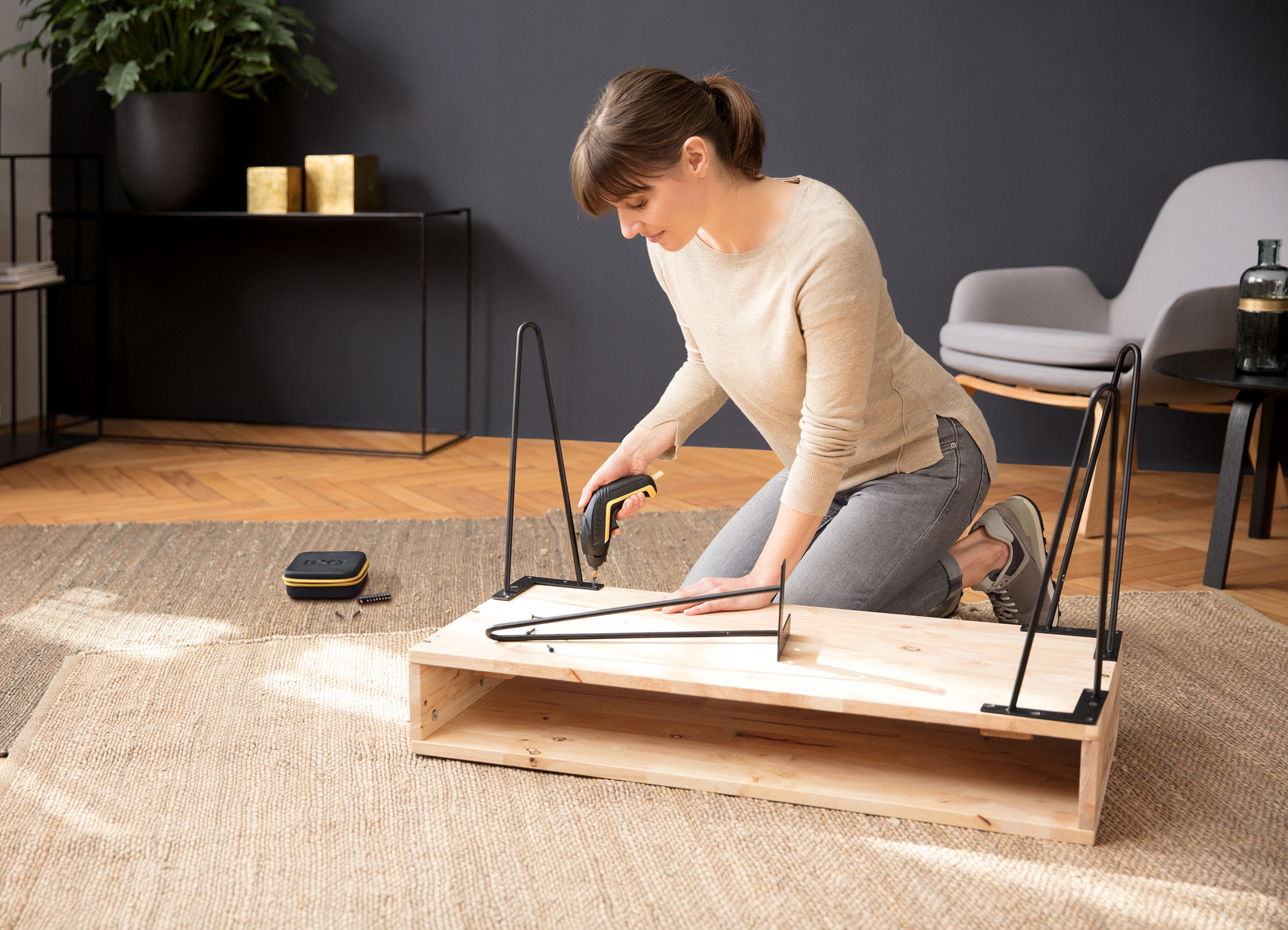 Put together flatpack furniture and fix screws around the house fast with these picks of the best cordless screwdrivers from just $20.

Cordless screwdrivers allow you to get much more done in much less time with half the bother. You don’t have to be an Ikea addict to know that assembling flatpack furniture can be a chore, while putting all the screws in place soon gets old in any DIY or PC-building project. But the best electric cordless screwdrivers can take the sting out of any teeth-gritting tasks, such as removing old, rusted-in screws and driving self-tappers in without a pilot hole. Yes, we know it’s bad practice, but who has the time?

What’s more, cordless screwdrivers just keep getting better. They’re smaller than they used to be, with lithium-ion batteries that do a better job of holding charge. The charging itself is now much more convenient, while there’s more control and torque for tricky jobs. If you’re still struggling with manual screwdrivers or working with an older cordless driver, then now’s the time to change. Give your wrists a break and save yourself some effort, and make those house and garden jobs go away.

How to choose the best cordless screwdriver for you

What should I look for in a cordless screwdriver?

Two things stand out. First, size and comfort. Cordless screwdrivers tend to come in three basic types: compact pistol-grip efforts with a built-in battery; cylindrical tools with a more traditional screwdriver feel; and larger models with removable batteries that will often double as a low-powered cordless drill. The last option is tempting if you want a tool that can take on both jobs, but they’re larger and won’t fit into the spaces that the more compact screwdrivers can. Between the first two types, your choice really comes down to where you’re trying to work and what feels right to you. The pistol-grip design is best for general use, but the traditional style is a little better in more confined spaces.

Second, power and torque. As a rule of thumb, the higher the voltage, the faster and more powerful the motor; you’ll find some screwdrivers that can only deliver 2Nm of torque – enough for flatpack furniture but not much else – and some that will go to 10Nm or more. Speeds run the gamut from around 180rpm to nearer 250rpm or more. Don’t assume, though, that more speed and torque are best in every case. Some more powerful screwdrivers can be overkill for certain jobs, thrusting screws straight through soft chipboard and causing an unholy mess.

Controls are usually kept simple. The more powerful cordless screwdrivers and drill-drivers will have some form of speed control, but most will have a single speed, forward and reverse gears, and a trigger to squeeze when it’s time to start screwing. Most models now also have some kind of built-in torch function, so you can see what you’re doing in dark corners.

Most of the models with built-in batteries charge from a standard wall charger, or even in many cases via a micro-USB port. This is convenient if you’re travelling around and also means you can keep using your screwdriver even if you lose the charger supplied. A few still use some form of charging cradle, where the tool slots into place.

With the larger drill/driver models, you’ll usually need to remove the battery and slot it into a separate charger. That said, even some of these are now charging through micro-USB.

Not all lithium-ion batteries are alike: some will hold a charge better than others, while some will also charge faster, within two or three hours.

Otherwise, the main selling point is the accessories – the different bits and extensions that will enable you to handle more specialist tools or more awkward jobs. More doesn’t always mean more value, as some manufacturers provide a whole bunch of cheap bits that will only wear away inside tricky screws and be good for nothing within a year. While the bigger brands will usually bundle in five to ten decent bits, you might want to budget for any extra bits you’re going to need and buy good ones from a reputable manufacturer.

The best cordless screwdrivers you can buy in 2021 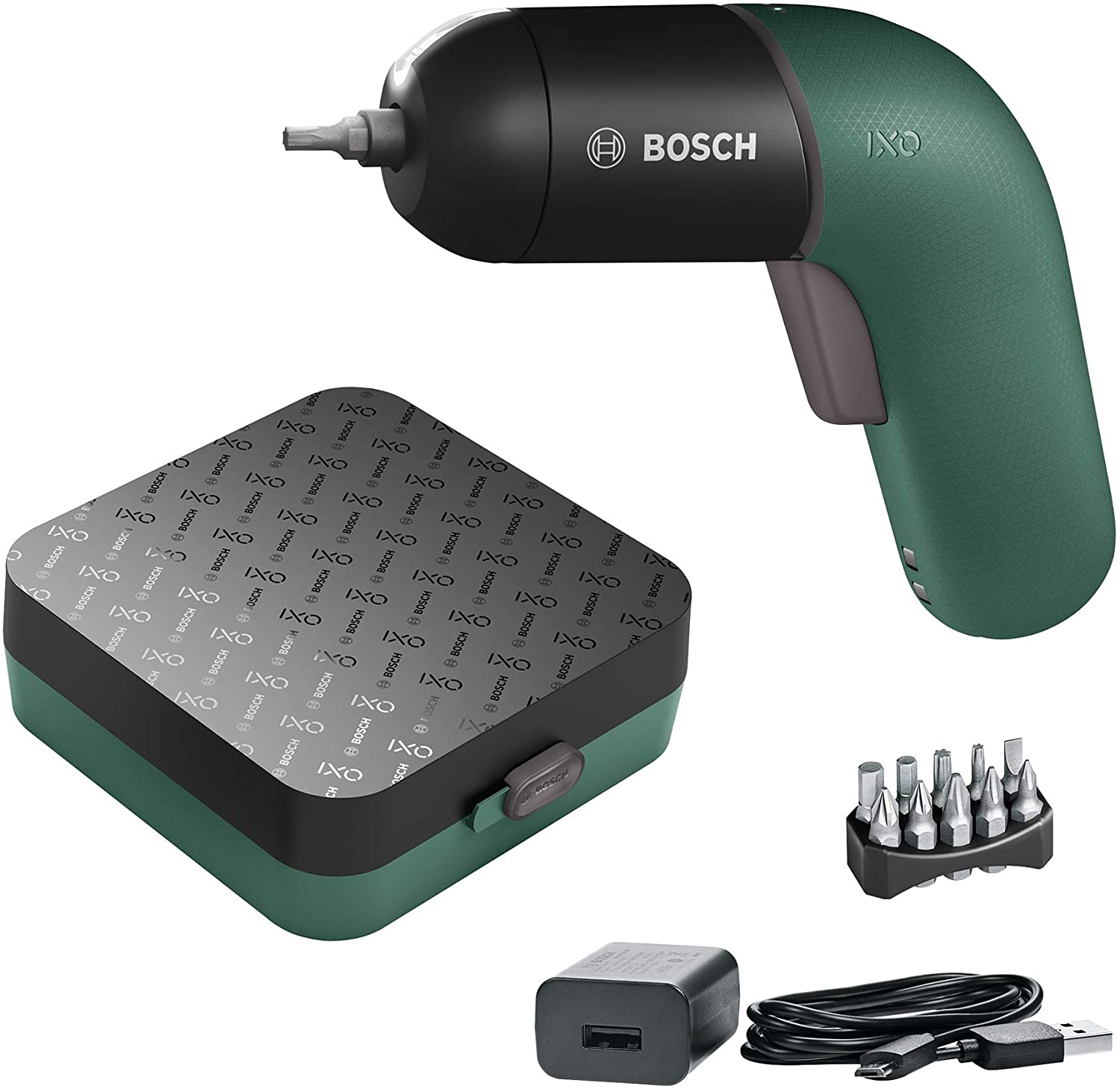 The Bosch IXO is a bit of a DIY design classic, and it’s never looked or felt better than in its new sixth-generation form. Bosch has worked to make the IXO a fun bit of household kit, even running a public survey to choose a cooler colour scheme, which means you can get this one in standard green and black or a raspberry tone. What’s more, you can accessorise it, with attachments that turn it into a mini-circular saw, a spice grinder, drill or even corkscrew.

Don’t think, though, that this isn’t a proper working tool. It’s got more than enough torque for assembling flatpack furniture or putting up shelves, and the variable speed trigger means you can start up slow, get a good grip, and then speed up to drive the screw in. Ten standard screwdriver bits and a case are bundled in, along with a micro-USB charger, which takes around three-and-a-half hours to do its work. It’s hard to describe a tool as lovable, but if any tool deserves it, this is it.

This Black & Decker model is small, light, affordable and good. The maximum speed might be slightly slower, but there’s a surprising amount of torque, which really helps when you’ve got to get screws in or out of tougher timbers. And while you might miss the convenience of micro-USB charging, the four AA batteries are easy to replace.

The Black & Decker also scores points for its compact size, low weight and overall comfort, and for bundling in 5 drill bits and an extension, which will help you get screws into some awkward spots. You’ll need to budget extra for more bits – only the basics are provided – but when a good screwdriver costs this little, it seems miserly to grumble about that. 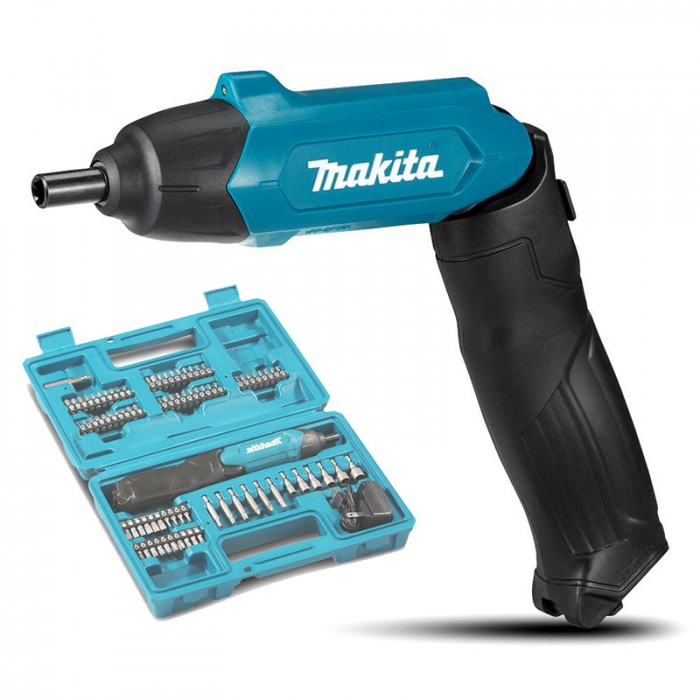 If you’re looking to get some serious work done, the Makita DF001DW has you covered. It can switch between pistol-grip and standard barrel screwdriver modes for different situations, and it feels extremely robust in the hand. Even the micro-USB port in the handle has a cover. A two-way switch at the top of the handle drives screws in or out at a single speed.

This one’s great for bigger projects: it’s versatile, it’s got plenty of welly and it comes with an 81-piece set of bits that should cover just about everything you’d need. With a respected brand like Makita, you know you’re not getting poor-quality accessories. It’s a little large for some smaller jobs, though, and a little too fierce for jobs that need finesse, such as PC builds or appliance repairs. When you’re up to something major, though, this is a top tool for the job. 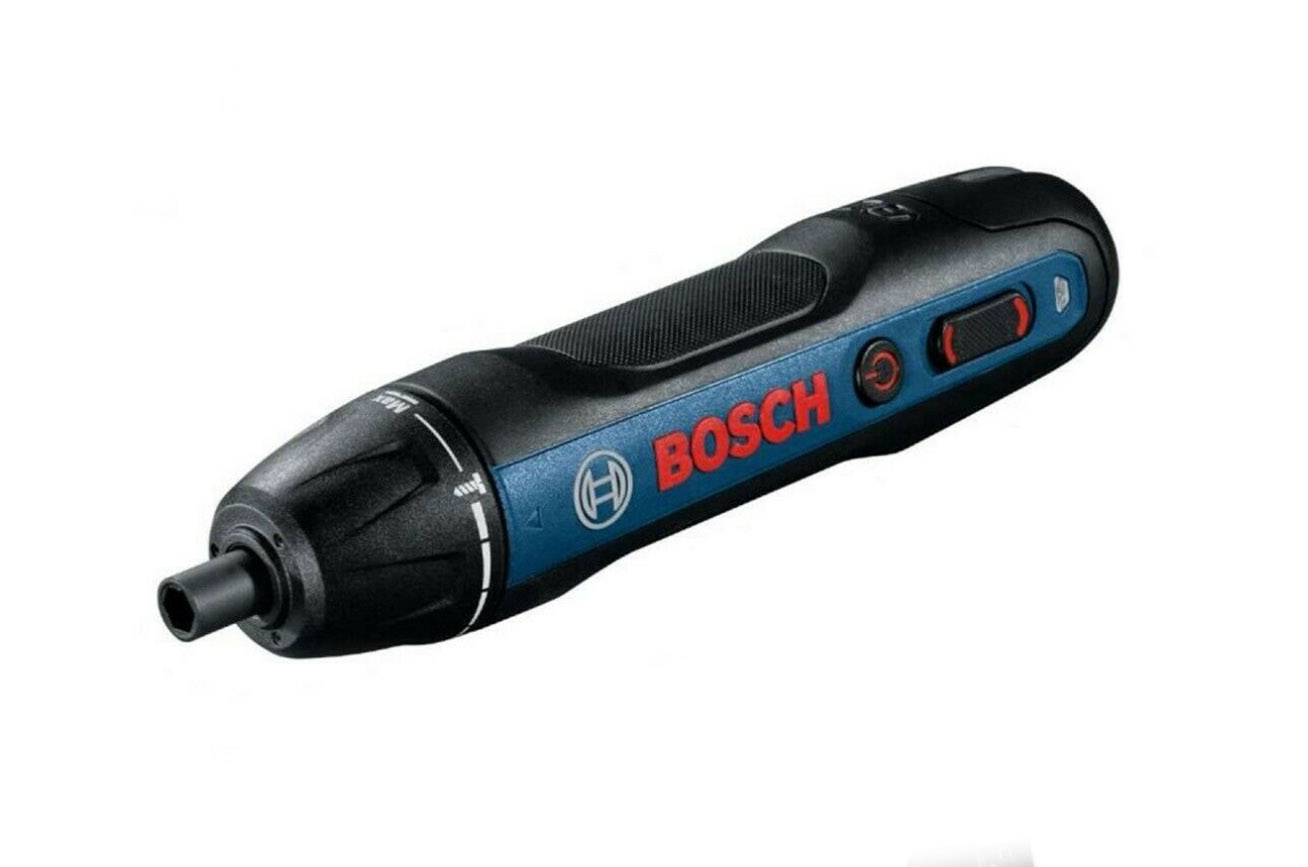 There’s something reassuringly traditional about the Bosch Pushdrive. It looks like a screwdriver and works like one too: there’s no pistol grip or trigger, and the motor starts running as you push the tip against the screwhead. The action takes some getting used to when removing screws, but makes perfect sense when you’re putting them in.

With a maximum 5Nm of torque, this is a pretty powerful screwdriver, and with its 32-piece accessory set and kit, you’ll feel equipped to tackle heavy DIY jobs. Yet it’s also lightweight, small and easy to use in awkward or cramped spaces, and it charges up over micro-USB in less than 90 minutes – and often less. With six torque settings to handle different tasks, it’s more versatile than your average screwdriver as well.

Worx Slide Driver: The most practical 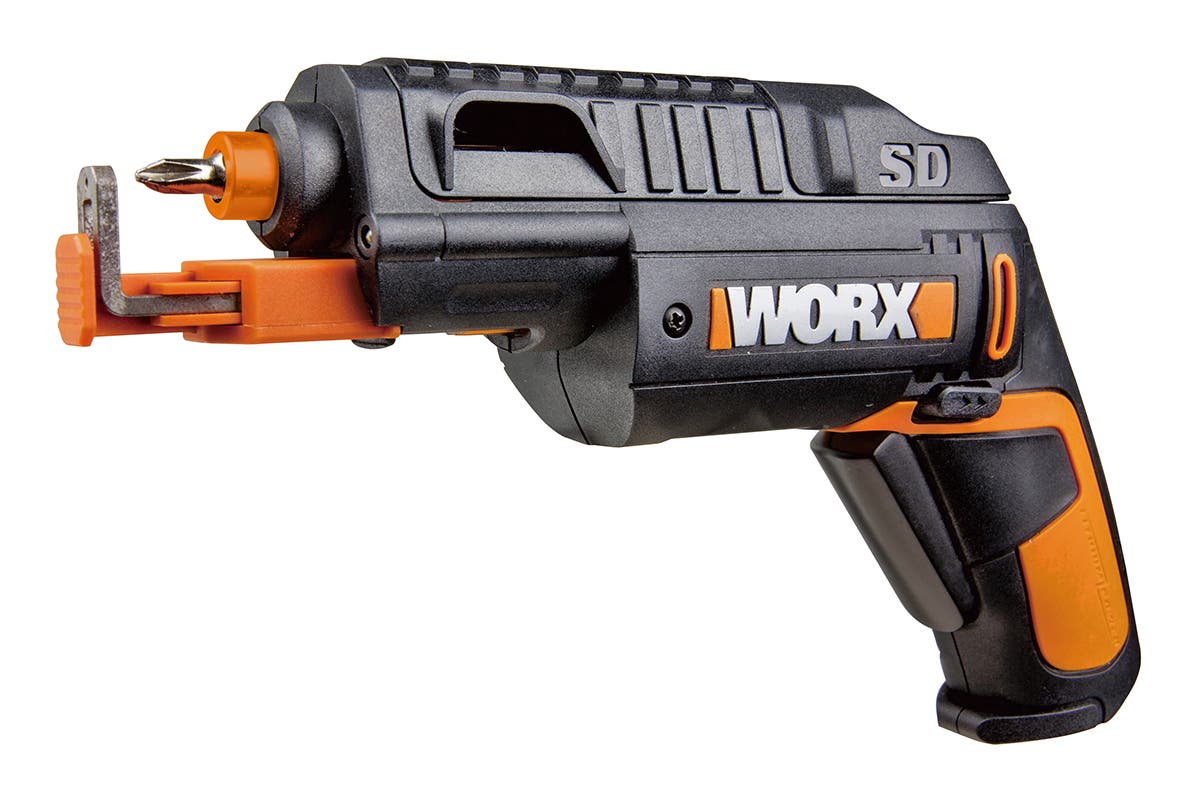 Where most cordless screwdrivers follow the same basic model, the Worx Slide Driver has its own smart ideas. How about a rotary cartridge that slots inside the body and allows you to switch between bits in an instant? Or how about a screw-holder attachment that slides onto the end of the tool and allows you to work single-handed?

On paper, it’s lower on torque than rivals, but in practice it can tackle most tasks, and it’s one of the most practical designs out there. We also have to admit there’s something cool about the revolver-style bit cartridge and slide-action switching mechanism. Throw in respectable charging times – around three-and-a-half hours – and you have a tool that seems to make every job that little bit easier.